It's been ages since my last post, snowed with work etc, so I reread my list of things to do for next year ... and funnily, the one thing I have been working on isn't on the list; a new rear frame to mount a giant wing.

I imagine this might be a bit controversial, and I haven't settled on the design yet, so don't hold back! ... does this agree with anyone else's interpretation of the rules? I see no mention of wings/aerofoils in the bike classes ... have I missed it?

Option 3: 1650mm wing mounted low ( with access to clean air at the sides rather than up above as in option 2).

So why not just use lead ballast for down-force? Weight distribution really ... I'd like it light back there so if it does start to come around the airflow has a good chance of pushing it back where it came from. Safety really.

Anyway, all still pixels on screens ... but will start moving on the new green wheel holding parts of the frame soon.

by momec3
Proto 3 I don't like Width gives leverage effect multiplied it you have side wind, proto 1 looks more right than the others. Why not lead instead of aero downforce. Aero=drag.

Lead is the generally accepted way to go, with no drag penalty like you say ... but I'm hoping for something like 200kg of down force which, in my situation, runs the risk of getting the center of aerodynamic force ahead of the center of mass. With aero there is negligible mass. So it's really a safety thing ... and I recon the only way to get big traction without going front wheel drive ...

Spoke with Walter today and he suggested looking at glider wings as precedents ... very long and skinny. You'd expect a glider to want high lift with low drag so it makes a lot of sense. We came up with a nice way to build them too ... CNC timber leading edge, plywood spars and a fabric skin ... think contemporary shape and WW1 materials. Or a model areoplane ...

Thinking about the leverage in cross winds ... wonder if that might tilt the bike into the wind, canceling things out?

by Stayt`ie
owi Russ, hows things,, I recall a lengthy discussion on either here or Slims site regarding wings on motorcycles,, if memory serves me correctly the consences was that thay are detremental to handleing, especially where wind direction is concerned

by momec3
A large vertical fin might be more what you need.

by momec3
Yep, glad I race cars. This is way more complex with balancing a bike.

Chris. Yes, a vertical wing is definitely on the cards. But I'm thinking about hiding it in the wake behind the rear wheel (we get 10" back there to play with). It would only come into play if the bike when sideways. Or detrimentally, if there was a cross wind. Wouldn't need to be that big if it's all the way back there ... possessing good leverage.

Here's a car with wings for ya! 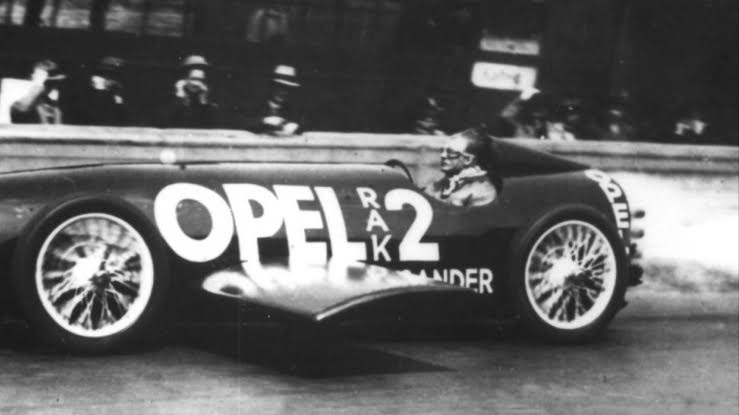 A jet engine would be fun!

by Stayt`ie
Landracing.com is run by Jon Weannerberg (spelling) aka Seldem Seen Slim who apparently was a gun slinger back in the day and Jon has a resemblance to him

by russelllowe
Thanks Stayt'ie ... looks like a bunch of great stuff there, hours of fun.

Big favour to ask ... does anyone out there have, or know someone who has, a Goodyear LSR tire that is past its used by date, damaged, or otherwise unserviceable, that I could buy/borrow for mock-up purposes?

My main concern is the fit of the bead to the rim ... making sure the wheels I get actually fit the bead properly.

The size I'm after is on the last page of the Goodyear PDF Catalogue here http://www.russelllowe.com/PhD/theTRUTH ... Files.html.

Goodyear say they are good to 320mph but Valery Thompson recently said hers were good to 600mph ... either way, they'll do me!

I'll put an add in the wanted section too ...

by David Leikvold
This year's MotoGP bikes are using little winglets on the front fairings, and they've tidied up airflow around the back wheel too. I think they use it to direct cool air at the back tyre. Tidying up airflow anywhere will always have benefits. You should also look at Formula 1 rear wings, or any open wheeler wings for that matter. I particularly like the longitudinal centre blade over the engine cover to straighten airflow before it gets to the wing. Don't have the wing relying on an unbraced round tube to hold it against the airflow, I think it would bend and suddenly the wing would be generating lift. I would also make the wing angle rider adjustable somehow, maybe a small electric motor. Big endplates will stop the air spilling off the sides of the wing too. If you put the wing behind the back wheel you will generate some lift in the front, maybe wings at the front would be useful too.

I'm told this is a very slippery shape.

It's a Young Body 60pc with the bottom half displaced a bit and tilted 3 degrees forwards.

Unfortunately not much will be left when I account for the rules and a desire to limit the side profile to make it less prone to cross winds.

But maybe enough to do the job aye?

Yes, been reading about wings on the GP bikes, cool stuff. I also like the center fin ... but mine will be more like an aeroplane with the fin mounted on a spar behind the rear wheel for maximum leverage as/if the bike goes sideways.

The wing will also look more like an aeroplane tail being held up in the center in a T shape.

by harky
Russel
the latest tech in “accessible “ wing shape/ design would be Super Cars ( V8 super cars) or maybe better wings , on the rear of
TCR cars they would be a well researched design
both are wide wings and very short in front/ rear length , and there may well be downforce figures available , which would be very useful. You would scale the length to suit the down force you are thinking of .