I note that rule 3.X states that SFI Style blower restraints shall be used on all vehicles using positive displacement blowers.

Try as hard as I can I cannot find anything suitable that would fit my setup.

Here's some pictures of the blower mocked up on an engine case. 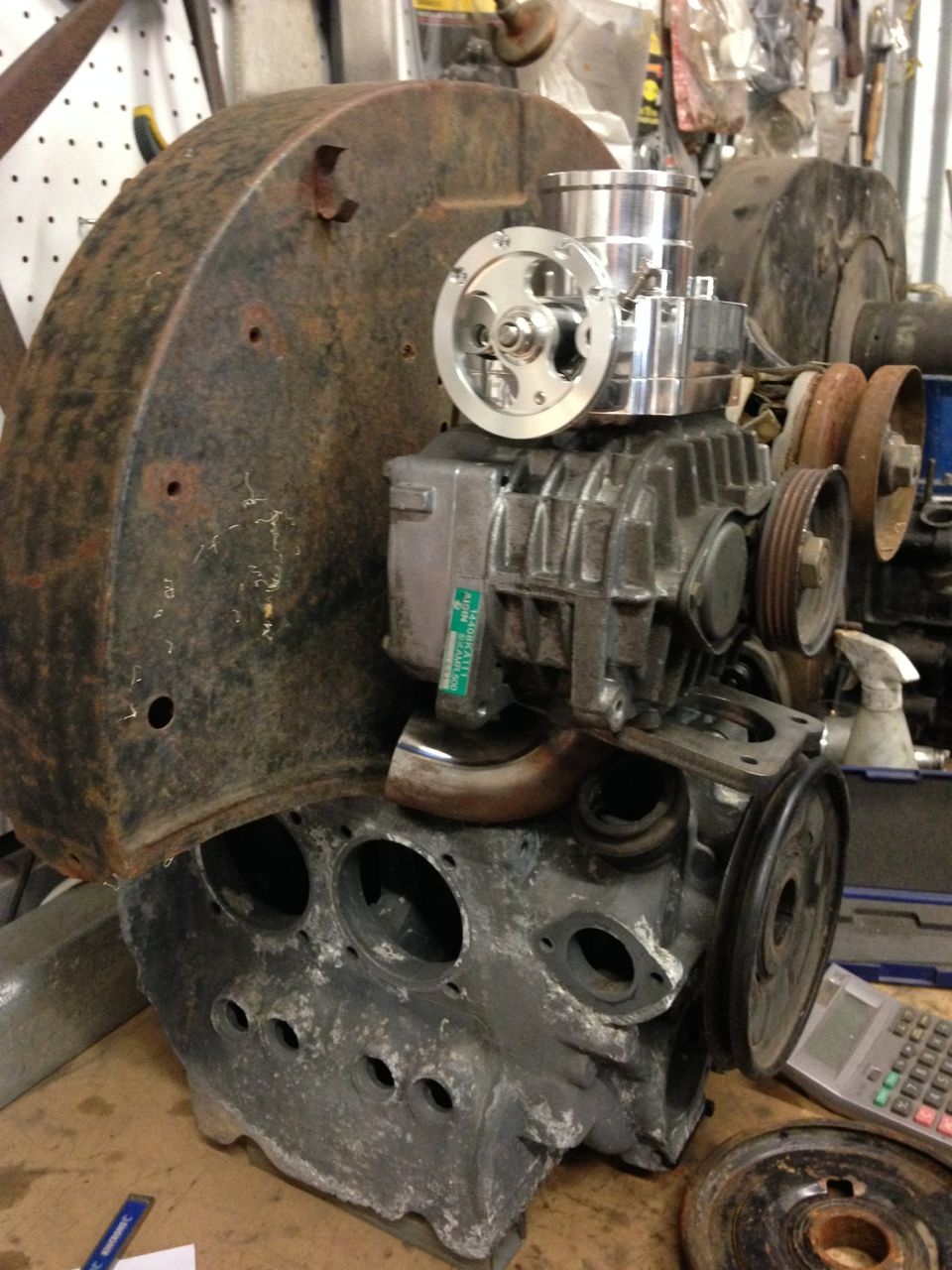 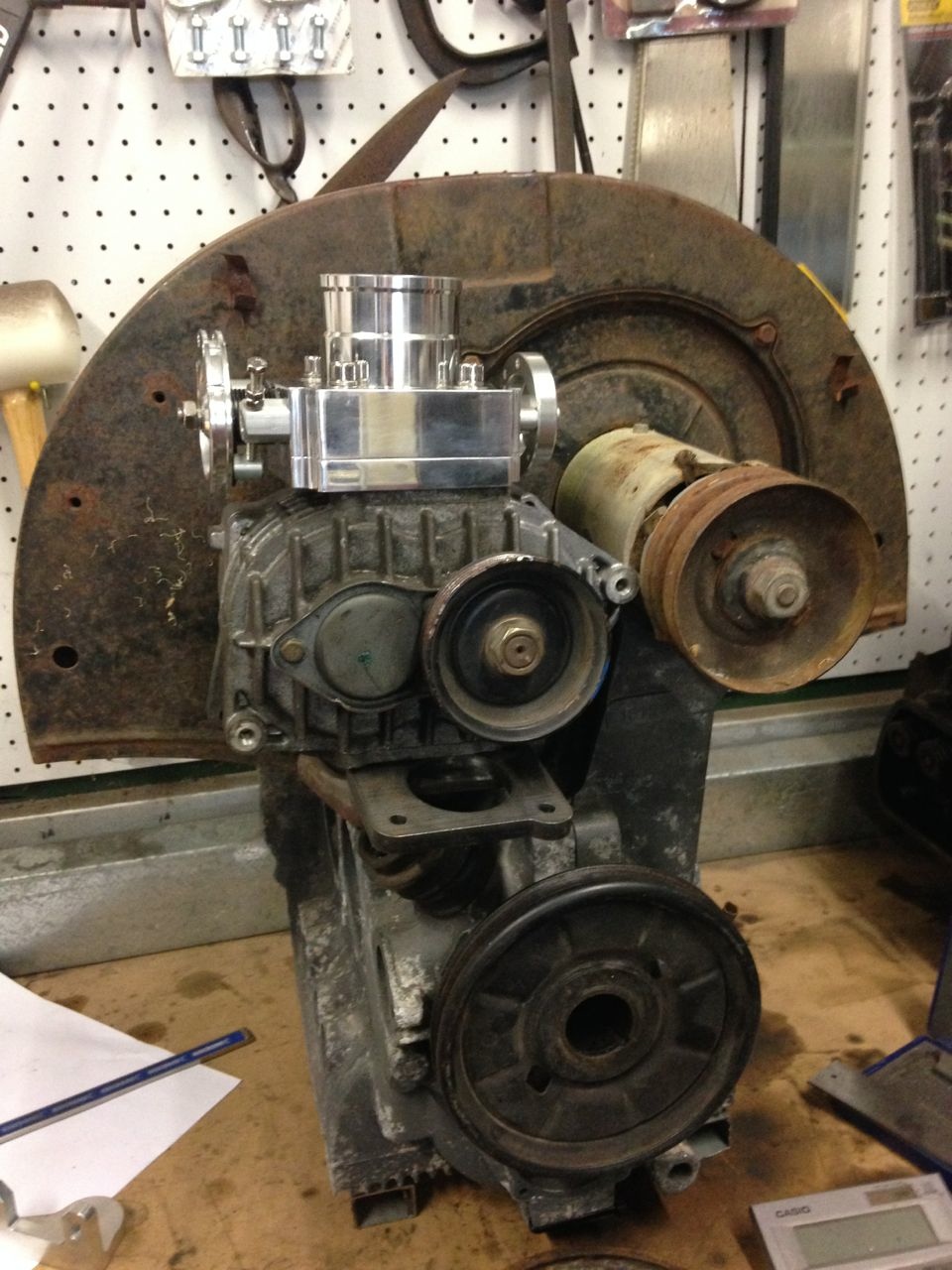 As you can see it does not follow the standard format of the V8 blower setups which the restraints are designed for. There are no suitable mounting points to attach straps to. As it is a horzontally opposed engine the manifolds studs are towards outside of engine and all other bolts are enclosed by the cooling tinwear (not shown)

I assume that the intent of this is to prevent the blower from being blown off of the engine in the case of a backfire. Is the restraint required as my blower is constrained under the decklid.

If it is still required would the need for the restraint be negated if I fit a blower safety valve or rupture disk?

If the restraint is mandatory, any suggestions to where I could go or who I could speak to to get something suitable made up that would still meet SFI specs.

What about something like this going through your shrouds to a plate made to fit between the blower and throttle body?

Not being a car guy I might be talking out of my arse.

Great build by the way.

Yes these are the ones I've seen but they are far too big for my little tiny charger which is less than half that size. I could probably cobble something together but whatever I do would not be SFI approved.

I do a lot of standard compliance auditing and standards development as part of my work and SFI TYPE is not the same as saying SFI Specification XX.XX. It is implying that it does not need to be SFI rated but of a similar design. If this is the case I'm sure that I could make something that works.

Perhaps one of the scrutineers can clarify.

I had a similar problem Mick, ended up with this,,(10mm plate, with heavy duty lugs under frame)

Yep thats the way I read it. Type not Spec.

I got those pics from Google Images, just typed in "SFI type blower restraint"

I use it to get quite a few ideas on stuff.

Done some further reading on this and there seems to be four different SFI specs that relate to supercharger restraint devices, these are basically split into fuel types:

The meat and bones of the standard that applies to me (14.1) is as follows:


2.0 DEFINITIONS
2.1 Supercharger Restraint Devices are used to constrain the supercharger in the event of separation from the engine due to an explosion.

Later on in the standard it goes on to define how the device shall be tested and gives the following information:


A. EQUIPMENT
The test machine must be capable of applying a minimum tensile load of 11,250 pounds {lb} (510kg) with an excursion travel of four to ten inches per minute {ipm} (10.2-25.4cm/min), and must have adequate instrumentation to verify the test load. The test machine must also be in calibration and traceable to the National Bureau of Standards.

After giving this some thought I would like to propose an exception for consideration as I do not think that this rule is entirely applicable in this case.

I work in the automotive metal stamping industry and can pretty much guarantee that at that force the blower would be entirely confined by the hood / decklid. It takes about 600 tons to press these panels, the panel would have no issue holding 510kg. The only real question would relate to the method used to fix the decklid itself.

If we assume that the loading is not equal, worst case scenario would be that one M8 fixing takes 99% of the 510kg test load - even in this case the 800kg breaking strain given for one M8 bolt will still hold the force.

From what I have read I believe that the SFI spec relates to blowers mounted through the hood or for vehicles not running a hood - as is the case with 99.9% of all V8 supercharged cars. It is also worth noting that the SFI spec specifically relates to drag racing (http://sfifoundation.com/drag-racing/) where the V8 top mounted blower is the most prevalent blower configuration. I believe that the intent of the specifications is to secure blowers that would be otherwise unrestrained.