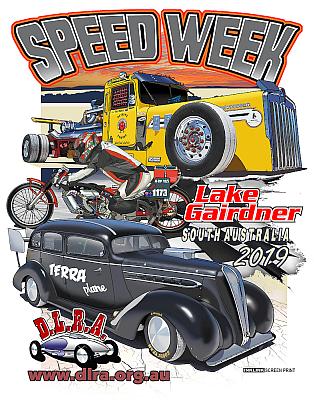 President and Clerk of Course Report

The early-birds and those helping to set up for Speed Week 2019 really suffered with some extreme heat from the Thursday to the Sunday hovering around the 47°C mark and very warm nights. It was that hot and dry we had to order in extra bottled water and extra bulk water (the first time since 2004).

The salt surface was a little rough or fluffy as someone described it. If you were driving your competition vehicle you wouldn't want to deviate from the prepared surface. And even though it looked dry, there was moisture there as evidenced by the rooster tails on many vehicles and the tell-tale salt left on the vehicles.

Racing got underway on the Monday and we were all back in the groove, with a good number of runs being made in the morning session. All the Rookies were getting their first runs out of the way on Track 2. Just as we were getting underway for the afternoon session there was some dark clouds come over the lake and a very light shower. The all of a sudden the timing gear started to malfunction, one after another. Proceedings were stopped whilst the timer investigated. What they found were 3 sets of blown wires from the lights to the cronoprinters (digital clocks) and the ports into the crono's blown as well! As they were trying to diagnose why this had happened, Peter Noy contacted Bruce to say he saw a lightning bolt hit the salt. And Peter was getting arcs of electricity when he was disconnecting the gear. Turns out that the salt is a very good conductor and the millivolts in the timing wires just enough to attract all that voltage. In 29 years of racing we have never experienced anything like this before.

Now we knew why, it was a matter of getting what we had left working again, so the tracks were reconfigured, no 2¼ mile beam on track 2 and no 2¼ or 6 mile beam on Track 1. But at least we still could run 2 tracks.
Track 2 did start again for a short time, but by now it was too late in the day for Track 1, so the plan was to reset for Tuesday. 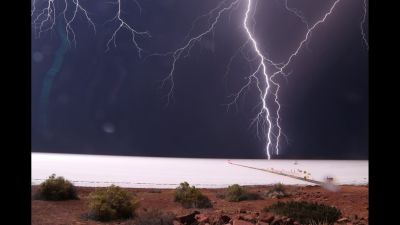 Tuesday morning the timers were out early to get everything set up so that we could get a good start, at 6.00am another huge electrical storm came through, lots of thunder and lightning, so there was a mad rush to disconnect everything. One of the volunteers got a good shock and another reported the aerial on the timing gear trembling from the electricity in the air. Not wanting to lose any more equipment the plan was to wait until the storm had well and truly passed, but this did not happen until almost midday. So racing did not start again until the afternoon. This photo (Credit: Aiden Galt) was taken at 6.00am, when it was still dark, just at the start of the storm.

Once we were back racing, it quickly became apparent to the Chief Inspectors that we did not have anywhere the number of volunteers to process the vehicles coming into Impound, so a compromise was devised, unfortunately the implementation of this compromise was miscommunicated, but we were soon back on track.

(The timing gear will shortly be going back to Switzerland for evaluation and possible repairs, fortunately the club has insurance that will cover for this. There are a couple of options for the wires, they could be replaced with new wires that have fibre optic ends that act like fusible links, or we could go wireless and there are some other benefits with this.)

Wednesday dawned much better weather wise with a strong breeze from the South East for most of the day, but there was a full days racing and a reasonable number of runs made. The rescue crews noticed that runs were taking a little longer than normal and some entrants were having trouble with the turn outs on Track 1. For next year the exit signs will be moved further away from the turn out to give more notice and there will be more turn outs available. Some entrants had already started heading for home.

Thursday was our best day in terms of number of runs, but with a strong northerly it was hard work for the entrants to set any qualifying speeds, even though some still did. The pits were getting emptier now with only the hard core or qualifiers remaining.

Friday classically was the best day weather wise, not too hot and no breeze. The Friday was originally set aside for record back up runs and these entrants were the first off the line. But with time remaining until the official close the Race Director permitted some additional runs on the proviso that if the qualified for a record they may not be able to back it up. Racing finished at lunch time.

There were a number of new ideas introduced for 2019, some more obvious than others, a big thank you to Rod Drabsch and the work that he did with the signs, I'm sure everyone noticed the improvements here. Even though many can't get it through their heads that they need to drive SLOWLY on the mats.

Our new Fire Tanker was a big hit and fortunately did not get used all week, no problem there. Our new (old) tractor did a sterling job and with a few repairs will be even better next year and our leaky crane truck did many useful jobs through out the week and will become a worthy asset I'm sure.

The introduction of Australian Records and an Impound went well or not so well, depending on who you talk to. I was just so pleased that everyone got with the spirit of it and gave it a go and I think the number of records achieved are a good indication that there is still room to break many records in years to come. But I'm sure there are some aspects that we will not be able to achieve or prune back on.

I'd like to give my thanks to all those that contributed, big and small to help make Speed Week the event it is. Nothing makes me happier than when I repeatedly get told that we have the most organized and well run event, I'm very proud of you all. We have something very special here and we cannot lose sight of that.

We now have a new fight on our hands with the announcement just 2 weeks after Speed Week of exploration mining to take place shortly at the other end of the lake. This is seen as a real and genuine threat to a place that we all love and respect and have been coming back to for 29 years. The damage that the mining industry makes is all too familiar to any land speed racer and the assurances given by these mining companies is definitely not to be believed or relied upon.

The results are still provisional, because I still have to check that everyone did their volunteering.

This year there is a new column in the results, title "Record Average".

There were many entrants who for what ever reason only made one run for the week, they are shown in this column with a "-".

Then there are those that made two or more runs but either were not fast enough to make a back up run or their average was below the current record, they are show with an "n/a"

There are some entrants that have a speed shown in this column. But it is not in Red, this is for one of two reasons, another entrant exceeded their speed or we have no record of them having come to Impound. If this is you, please contact us to explain.

Lastly there are speeds shown highlighted in red, these are deemed to be new Australian records.

We want to recognize all those that have reached a very significant milestone in Land Speed Racing. To be eligible for the 300MPH Club the competitor must have exceeded 300MPH whilst setting a new record for their class. Each new 300MPH club member receives a specially embroidered "red hat" to signify their achievement.

There were no new entries for the 300 mph club this year. Jim Knapp did manage a 309.438 mph pass but under the new Australian Records was unable to back it up.

We want to recognize all those that have reached a significant milestone in Land Speed Racing. To be eligible for the 200MPH Club the competitor must have exceeded 200MPH whilst setting a new record for their class. Each new 200MPH club member receives a specially embroidered version of the "red hat" to signify their achievement.

The DLRA also wishes to recognize each of those competitors who have achieved 200MPH for the first time. In recognition of their achievement they receive a special DLRA "red hat with black visor".

Thank you to our very generous and supportive Speed Week Sponsors