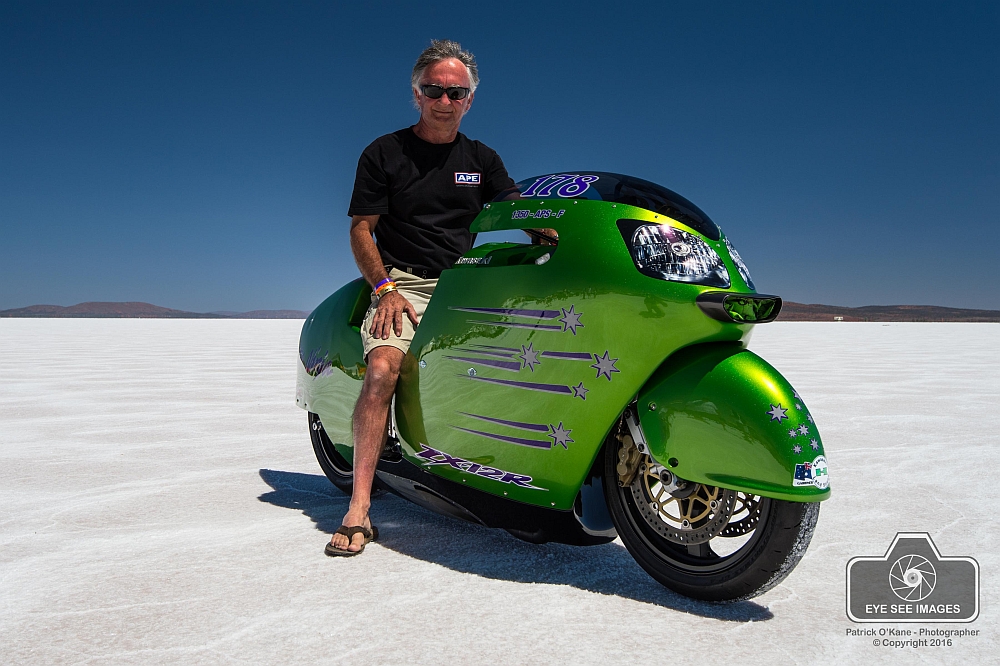 My name is Ronnie Stayt, DLRA member # 178.
My interest in land speed started when I heard wireless reports on Donald Campbell's efforts setting the World Landspeed record on Lake Eyre in 1964. As a kid this fascinated me, the fact that a car could go "so fast". Over the years since i have followed the fortunes of Breedlove, Noble and Co, admiring their achievements.
Being a motorcycle type person, the Streamliners of Leppan, Manning and Vesco really interested me. Then in the late eighties, articles about Dave Campos were being published in Easyriders magazine. Now this really got my attention, so much so I designed on paper, and dreamt of building a Motorcycle `Liner, however having a young family and a lack of funds kept it at the dreaming stage. Now 30years on, a few dollars in the back pocket, maybe ????.
The 2004 bike, "Black Betty" M/BF1350 Record @ 159.61mph.

2004 was the first year that I have competed on "the salt".
Although she handled as if on rails, I have extended the wheelbase to 71", in an effort to minimise rear wheel slippage. The seat and handlebar positions have been changed, to help reduce frontal area. Also I will be installing a larger turbine housing to overcome the asthma she suffered. This bike will be run at the 2006 event, where after obtaining my 175mph licence, it will be what to see what she is capable of. The bike will be "for sale", as I now have a Kawasaki XZ12 to play with."
thankyou, Ronnie Stayt...